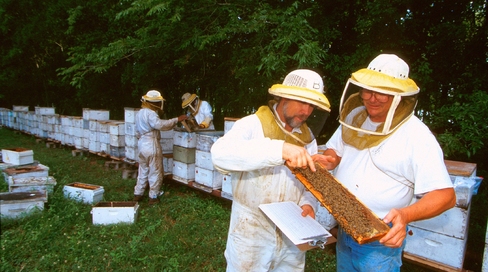 WASHINGTON—(ENEWSPF)–June 20, 2016.  National Pollinator Week begins today as beekeepers, farmers, scientists, food movement advocates and consumers around the country elevate the plight of bees and other important pollinators. Center for Food Safety has joined several beekeeping, farming, and food advocacy representatives in a national tour to raise awareness on pollinator declines and to demand government action on regulating the use of the toxic pesticides that contribute to their decline. The Keep the Hives Alive Tour makes its final stop during Pollinator Week in Washington D.C. on Wednesday with a truck carrying 2.64 million dead bees parking in front of the Environmental Protection Agency and surrounded by beekeepers and concerned citizens demanding action from the agency.

“This week and every week we should be doing everything we can to protect bees and other pollinators that are critical to our health and the health of our food system and environment. More than a third of our food is dependent on pollinators and we cannot afford to let their catastrophic declines continue to go unchecked,” said Larissa Walker, Center for Food Safety pollinator program director.

Bees, butterflies, birds and bats are experiencing alarming population declines that will be devastating to the food system if left unaddressed. Beekeepers across America reported losing a record 44 percent of their honey bee colonies from April 2015 to April 2016 – the second year in a row that colony losses were above 40 percent. In the United States pollination contributes $20-30 billion in agricultural production annually. Scientific studies continue to link pesticide use with bee kills and poor colony health.

“The millions of dead bees that have accompanied us during the Keep the Hives Alive Tour are carrying a message – this is just a tiny fraction of the devastation beekeepers are dealing with year after year. It’s well past time for policymakers to wake up and take action to curb the use of the toxic pesticides that are harming pollinators, people and our environment,” said Walker.

The Keep the Hives Alive Tour will culminate in a rally at the EPA headquarters on Wed. June 22 from 1:30-2:30pm.

Bee Decline and Pesticide Use