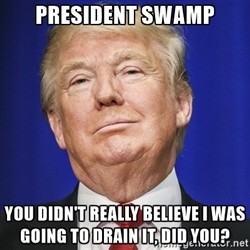 How many stories of buyers remorse and suckers who got conned by the GOP’s P.T. Barnum production machine will we be reading over the next few years?  I suspect it will be a constant stream.  The people who failed to fulfill their responsibility to be informed citizens and took the easy way out by buying into the GOP propaganda are going to give us a constant stream of sad but darkly entertaining stories of “we really believed the lies he told us and we didn’t believe him when he was telling us the truth”.

This story is about a couple of Trump supporters who were trying to take advantage of an Obama program to try and save their house, ended up getting screwed by a corrupt bank owned by Trump’s new nominee for the Secretary of Treasury.

According to the coalition, OneWest foreclosed on more than 36,000 homeowners under Steven Mnuchin. During that time, the FDIC made payments to OneWest totaling more $1 billion. Those payments went to the “billionaire investors of OneWest Bank,” says Stein, “to cover the cost of foreclosing on working-class, everyday, American folks,”

Rex Schaffer, 86, and his wife Rose were among those who lost their homes, in a OneWest foreclosure. After living nearly 50 years in their home in La Puente, Calif., the Schaffers took a home equity loan but struggled to make the payments. They say they qualified three times for a government assisted modification, but OneWest failed to modify the loan.

“It was a disaster dealing with those people,” Rex Shaffer says. “We’d have a different person every time we called in.” He counted 33 OneWest employees, in all, and each one would give him “a different story.”

Facing threats that their home would be auctioned off, the Schaffers finally got through to a OneWest vice president. According to Rex Shaffer, the VP said, “I’m going to get you a 60-day extension on the sale date, so we can work this thing out.” That was on Feb. 17, 2011. But the next day, the Schaffers’ house was sold without their knowledge. “We didn’t even know it — didn’t have the faintest idea,” Rex Shaffer says.

They voted for Donald Trump, but Rose Schaffer says they’re praying he doesn’t choose Mnuchin as his Treasury secretary. “If he can’t run his own little bank,” she asks, “how can he handle a large thing for the United States?”

You talk about voting against your own interests!  They were trying to take advantage of a program the Democrats and Obama had to fight tooth and nail against Republican obstructionism to get implemented, and then they decide to vote for the guy who promised to repeal everything Obama.

I think we Democrats have two major obstacles to overcome.  1) We have to figure out a way to counter the vast right wing propaganda machine.  2) We have to figure out how to make journalists and the main stream media start respecting the unique advantage they were given in the constitution, and start informing the public on matters that are critical to the survival of our democracy.

Until we get a media that will inform our public, and until we have a public that will take their responsibility to be informed seriously,  I guess we’ll be reading a lot of stories about the foolish people who got suckered by the GOP and will be paying for that foolishness for a long time.