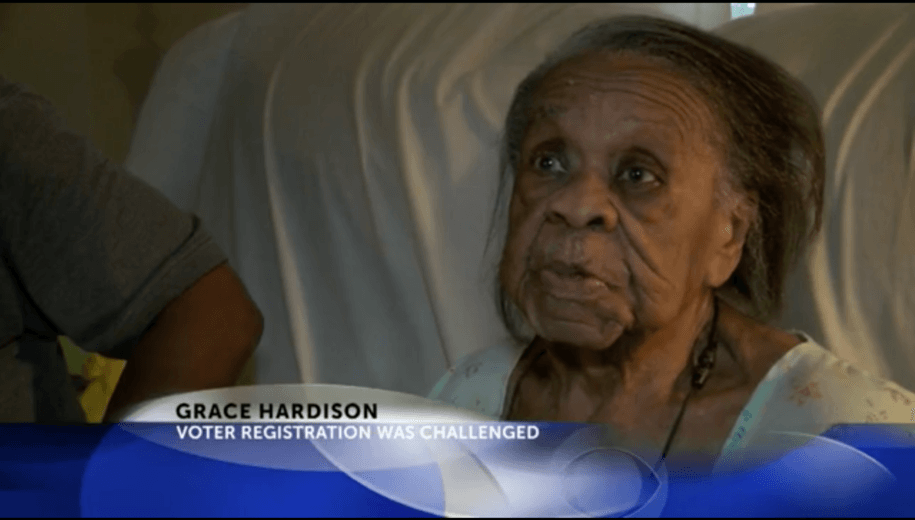 A lifetime of residence in North Carolina, a quarter of a century of never missing a vote is not enough of a history for Republicans there, so they tried to keep this voter out of the polls.

Just weeks before early voting began in North Carolina, Grace Bell Hardison, a 100-year-old African-American woman, was informed that her voter registration status was being challenged. If she didn’t appear at a county board of election meeting or return a notarized form she would be removed from the voting rolls.Hardison has lived in Belhaven, North Carolina, her entire life and voted regularly for the last twenty-four years, including in North Carolina’s presidential primary in March. “The first thing out of her mouth was ‘I can’t vote,’” her nephew Greg Sattherwaite said after she received the letter. “She loves to vote. She will not miss election time.”

Hardison’s registration was challenged by Shane Hubers, a Belhaven Republican, based on a mailing done last year by a candidate for Mayor. Mail that was returned as undeliverable in 2015 became the basis for the challenge list.

That’s voter caging, by the way—sending out a mass mailing to get undeliverable addresses, then attempting to strike those voters from the rolls. In this case, the mail was sent to Hardison’s house, but she has all her mail delivered to a post office box. Hardison is by no means the only North Carolina voter to be targeted. The challenge list from that mailing included 138 people, 92 of whom (like Hardison) are black and registered Democrats. Hardison’s family got in touch with local media, which reported those figures, and shamed Hubers into dropped his challenge. But caging is happening in other North Carolina counties as well.

This is one of the activities that has forced the Republican National Committee to “refrain from undertaking any ballot security activities” by court order since 1981, a consent decree that Democrats petitioned on Wednesday to be renewed for another eight years because of the Trump campaign’s call for poll watchers to “stop crooked Hillary from rigging this election.”

The North Carolina GOP isn’t under any such decree, so they’ll keep going after 100-year-old voters, and everyone else, who they think might just be voting Democratic this year.