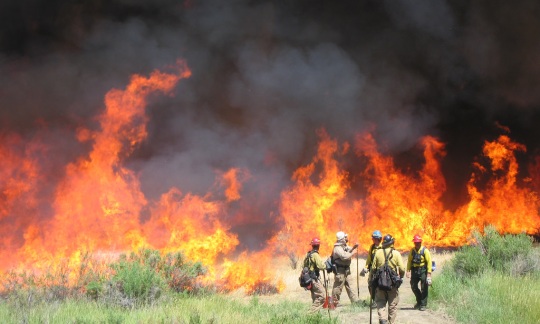 BOISE, ID – (ENEWSPF)–May 24, 2016.  U.S. Secretary of the Interior Sally Jewell today announced $10 million in funding to help increase the resiliency of critical landscapes across the country to better mitigate the impacts of wildfire and climate change.

“These projects will protect the nation’s diverse landscapes making them more resilient to wildfire for future generations; with help from our partners who also recognize that this challenge is too great for any one organization to tackle on its own,” Secretary Jewell said. “The funding restores iconic landscapes and vital watersheds, reduces fuels and controls invasive species to re-establish native vegetation, while reducing the risks to the public and our firefighters who respond to wildland fires.”

Secretary Jewell called on Congress to fix how the federal government budgets for wildland fire suppression. If the fire season is as costly as recent years, federal agencies will be forced to take funding out of other critical programs that increase the long-term resilience of public lands to fund wildfire suppression. President Obama’s Fiscal Year 2017 budget continues to propose changing how the federal government budgets for fire suppression costs to treat the requirements of extreme fire seasons in the same way as other emergency disaster needs.

Jewell made the funding announcement after touring the Soda Fire Rehabilitation site, the location of a nearly 280,000 acre wildfire burn last year, affecting federal, state and private lands in southwest Idaho and eastern Oregon. The Soda Fire represents the most significant loss of sage-grouse habitat in a single fire season, burning portions of more than 40 grazing allotments, popular motorized and non-motorized trails and more than 400 square miles of wildlife habitat. She was joined by federal family firefighting partners who provided recovery resources and are now providing rehabilitation expertise at this site, including at the Bureau of Land Management (BLM), U.S. Fish and Wildlife Service (FWS) and the U.S. Department of Agriculture’s Natural Resources Conservation Service (NRCS).

“These projects emphasize collaborative landscape-scale planning to reduce the risk from catastrophic wildfire while enhancing the protection of watersheds and critical culture and natural resources,” said Kris Sarri, Principal Deputy Assistant Secretary – Policy, Management and Budget. “The work being done provides valuable insights on making landscapes resilient to wildfire. The benefits of the program are already being realized, and the President’s budget requests $30 million to help us expand this program to more states.”

Through a competitive evaluation process in 2015, the Interior Department selected 10 projects and provided an initial $10 million in funding for them as a pilot program when the Wildland Fire Resilient Landscapes Program was first announced. The approved proposals, known as Resilient Landscape Collaboratives, received funding at a scale to provide results in five to ten years. The funding announced today will support the second year of work for these projects. A map and additional information on each project are available here.