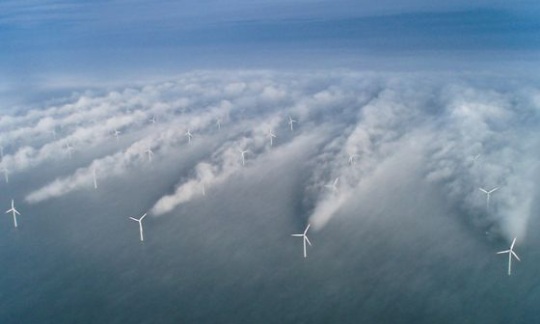 “This is another major step in broadening our nation’s energy portfolio, harnessing power near population centers on the East Coast,” Secretary Jewell said. “Offshore wind power marks a new frontier in renewable energy development, creating the path for sustainable electricity generation; job creation, and strengthening our nation’s economic competitiveness. I am optimistic about New York’s renewable energy future, as we work toward harnessing the enormous resource potential of wind energy offshore the Empire State.”

“As a New Yorker, I am thrilled about today’s announcement and what it means for our state’s renewable energy future,” Assistant Secretary for Land and Minerals Management Janice Schneider said. “The Interior Department has worked closely with our state partner and coordinated with our Renewable Energy Task Force Members to identify an area that can support a large-scale commercial wind project.”

A “Proposed Sale Notice (PSN) for Commercial Leasing for Wind Power on the Outer Continental Shelf Offshore New York” will be published in the Federal Register on June 6, 2016, and will include a 60-day public comment period. This document provides detailed information concerning the area available for leasing, the proposed lease provisions and conditions, auction details (e.g., criteria for evaluating competing bids and award procedures) and lease execution. Comments received electronically or postmarked by the end of public comment period will be made available to the public and considered before the publication of the Final Sale Notice, which will announce the time and date of the lease sale. For information on how to submit comments, visit www.boem.gov/New-York.

The end of the PSN comment period also serves as the deadline for any companies wishing to participate in the lease sale to submit their qualification package, if they have not already done so. To be eligible to participate in the lease sale, each bidder must have been notified by BOEM that it is legally, technically and financially qualified by the time the Final Sale Notice is published. To date, seven companies have qualified to participate in a future auction for the New York Wind Energy Area. Companies planning to submit a qualification package are strongly encouraged to submit as early as possible during the comment period to ensure adequate time for processing.

BOEM will host a public seminar in late June or July in New York City to describe the auction format, explain the auction rules and demonstrate the auction process through meaningful examples. It will be followed by a public meeting on BOEM’s planning and leasing efforts regarding New York offshore wind energy activities. The time, venue, and related materials for the seminar and public meeting will be posted online at www.boem.gov/New-York.

In addition to the PSN, BOEM will publish an Environmental Assessment (EA) on the same day for a 30-day public comment period. Comments received electronically or postmarked within that period will be made available to the public and considered before the publication of the revised EA. The EA considers potential impacts associated with issuing a lease, including those from conducting surveys, and approving the installation of resource assessment facilities (i.e., meteorological tower and/or buoys) in the area. BOEM will also consider these comments in determining whether to issue a Finding of No Significant Impact, or conduct additional analysis under NEPA. For information on how to submit comments, go to www.boem.gov/New-York.

“This is a great day for New York and our country as we continue to diversify our nation’s energy portfolio,” BOEM Director Abigail Ross Hopper said. “The proposed lease area could make substantial contributions to the region’s energy supply and assist local and state governments – including New York City – in achieving their renewable energy goals. In the meantime, we will continue to work with New York Renewable Energy Task Force, local communities and key stakeholders to reduce conflicts and bring clarity to potential wind energy developers.”