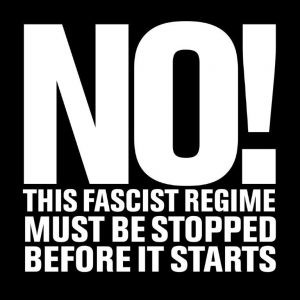 Stop the Trump/Pence Regime Before It Starts!

CHICAGO–(ENEWSPF)–December 29, 20165. On December 30, Governor Bruce Rauner is hosting a major fund raiser for Vice President-elect Mike Pence. This $10,000 per couple lunch will be met by protesters telling Pence: YOU and TRUMP are NOT WELCOME. Since protests forced Trump to flee from UIC Pavilion last spring, neither Trump nor Pence has shown their face in Chicago. Now Pence is coming at the invitation of Governor Rauner himself, who wouldn’t even say Trump’s name before the election but is now throwing in with his fascist program – no surprise! Protesters will let him know too that “We Will Not Accept a Fascist America!”

This protest will build momentum for an outpouring on New Year’s Eve at 7pm at Trump Tower. Similar protests will be happening nationwide on New Years Eve.

Refuse Fascism, the organizers, says they are protesting Pence because:

“Pence is an LGBTQ hating Christian fascist. He tried to divert HIV/AIDS money to fund conversion therapy. He wants to ban ALL abortions AND deny birth control. He signed legislation that mandated funerals for aborted fetuses.  The Trump/Pence regime will mean nationwide Stop and Frisk, further militarization of the War on Drugs, widespread torture, global war   and so much more.  Pence is a longtime, and very dangerous, operative of the Christian Right which wants to institute a theocratic state in the US. According to Jeremy Scahill “Pence will be the most powerful Christian supremacist in US history.” Say NO!”