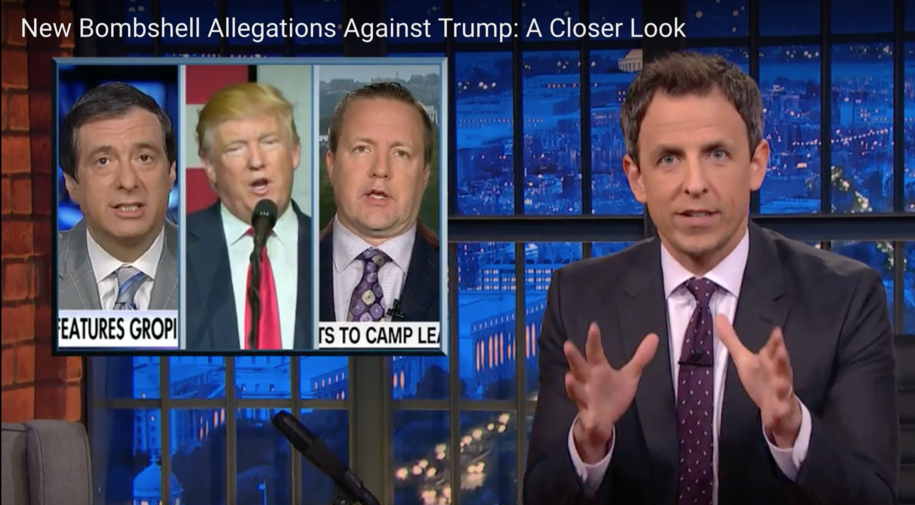 Late Night with Seth Meyers is quickly becoming one of most beloved left-leaning shows on network television—and Meyers was definitely “on” Thursday night. Between his regular segment “A Closer Look” and guests Kevin Hart, Secretary of Defense Ash Carter and Democratic U.S. Senator Al Franken, this exceptional show was full of politics, entertainment, and humor, but also touched on some very serious and  poignant messages about rape and rape culture.

Starting with “A Closer Look,” Meyers began his nightly pummels upon Donald Trump and showed absolutely no mercy for the Republican nominee—nor Trump surrogates. He showed a clip of Trump’s campaign manager KellyAnn Conway trying to defend Trump to Anderson Cooper by saying Hillary should be doing better at the polls—because she’s a woman. Meyers brilliantly comes back with:

“What is she talking about? You think Hillary should be farther ahead because she’s the first female president? If running as the fist female president was an advantage, it probably would have happened before 2016.”

The crowd went wild. Meyers says the Trump camp continues to spin every positive as a negative.

Meyers talked about Trump’s new ad with the slogan, “DONALD TRUMP WILL PROTECT YOU. HE’S THE ONLY ONE WHO CAN.” Meyers fires back with:

“It sounds more like a line from a Lifetime movie about a lunatic stalking his ex-wife.”

Meyers then jumps into the growing number of allegations of sexual assault by women.

“Now, Trump denied the allegations calling them ludicrous at a rally today, but here’s the problem with Trump. There’s very good reason he did what he’s accused of. Why? Because an irrefutable inside source told us—Donald Trump

Donald Trump is his own Deep Throat.”

We’re reminded by Meyers how Trump literally explains, in specific detail, how to get away with exactly the kind of sexual assault these women are describing. That may be why Trump supporters have gone to absurd lengths this week to try to excuse or dismiss the comments on that tape. He brings up former Arkansas Governor Mike Huckabee and shows the former Arkansas governor explaining, on Fox,  what’s really motivating Trump supporters. Huckabee and others say,  “At least he’s not Hillary.”

Meyers comes back and says:

“He’s right! Trump is Quint, and Hillary is the shark. Wait, how did that movie end again? “ (Applause)

Meyers says, “There is one way that Trump is like a shark: He sucks in air like he’s about to go back into the water.” (Meyers shows clips of Trump habitually sniffing during the debates.)

One of the most stunning statements made on late-night television belongs to Meyers when he said:

In the end this week, the revelations about Trump’s predatory behavior has pulled the curtain back on the moral cowardliness of many in the Republican Party. Tump supporters will go to any lengths to excuse his worst behavior, and now in the wake of these latest allegations, Trump supporters and even some of the media, have tried to focus not on the substance of the allegations, but on the timing.

The crowd response was amazing. Here is the Seth Meyers segment on NBC’s YouTube video:

During the rest of the show, Meyers talks with comedian Kevin Hart, then visits Secretary of Defense Ash Carter at the Pentagon. One of the funniest parts of that segment is watching them make prank calls to President Obama.

“I have been a supporter of Hillary’s throughout this whole election. She is the smartest toughest most experienced hardest-working person I know.” (Applause).

Sen. Franken stresses the importance of voting—and how he won his own election by a mere 312 votes.

All in all, it was a great show with some excellent messages. Watching Seth Meyers can be like watching the best of Saturday Night Live news briefs which are often some of the best segments of SNL shows. Loving the Meyers.