Your Weekend in Trump: Paranoia, Racism, and 'Go To Another State' - eNews Park Forest
News Ticker 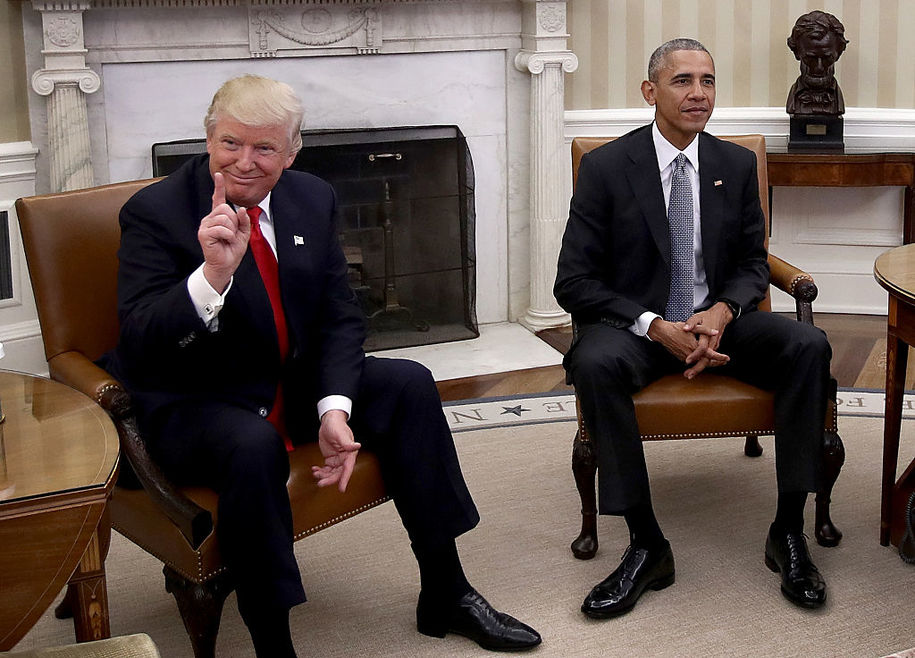 When it comes to spreading fear, divisiveness and discord, Donald Trump works weekends.

As Trump moves toward the day of actually painting the White House whiter, he’s begun filling in his cabinet positions. The announcement that perennial Republican whipping boy Reince Priebus would be taking the spot as chief of staff seemed to calm both mainstream Republicans and media with its sweet whiff of “why Trump is just another politician!” But while Priebus’ appointment headlined the news, that wasn’t what Trump actually did. Not at all.

Trump split the traditional COS role into two positions, leaving Priebus as a glorified appointment secretary, while turning over the usual legislative and positional tasks of the office to white-nationalist propagandist, Steve Bannon.

In selecting Mr. Priebus, Mr. Trump passed over Stephen K. Bannon, a right-wing media provocateur. But the president-elect named Mr. Bannon his senior counselor and chief West Wing strategist, signaling an embrace of the fringe ideology long advanced by Mr. Bannon and of a continuing disdain for the Republican establishment.

The dual appointments — with Mr. Bannon given top billing in the official announcement — instantly created rival centers of power in the Trump White House.

Priebus will get to play “guy in suit at the door” to make Paul Ryan and Mitch McConnell feel comfortable when they come to call. Meanwhile, racist fascist Bannon will be in his flip-flops and shorts, doing the real heavy lifting when it comes to getting that pesky democracy out of the way.

But that wasn’t the only thing Trump and his surrogate band did over the weekend. Not at all.

Kellyanne Conway issued a warning to Harry Reid, one that was clearly meant to be heard by others, as well.

Since Trump has already made it clear that the Alien and Sedition Acts 2.0 are on the way, consider this just another boundary warning for your new, more streamlined “Freedom to say Only Good Things About Trump” version of the First Amendment.

Trump also let it be known that Abraham Lincoln’s home was just not gold enough for him. So Trump will be splitting his time between DC and the new national capitol at Trump Tower.

Mr. Trump, a homebody who often flew several hours late at night during the campaign so he could wake up in his own bed in Trump Tower, is talking with his advisers about how many nights a week he will spend in the White House. He has told them he would like to do what he is used to, which is spending time in New York when he can. […]

A “homebody.” Yes, he spends time at Trump Tower quilting and putting up jars of strawberry jam.

Also he must sleep in his native soil each night or Melania has to surrender an extra pint of blood.

Many people figured out that Trump meant to keep up his schedule of daily mini-Nuremberg rallies if he lost the election. But surprise! Just because Trump is going to be president, doesn’t mean he would be out there catching some salutes, pointing out enemies, and keeping the hate toasty.

His aides say he has also expressed interest in continuing to hold the large rallies that were a staple of his candidacy. He likes the instant gratification and adulation that the cheering crowds provide, and his aides are discussing how they might accommodate his demand.

Instant gratification and adulation. Yes, those are great goals for a president. And by the way …

This was Hitler’s elevator at the Berghof to the Eagle’s Nest. Just saying. pic.twitter.com/5OiOjKUlJv

Those who had any doubts about Trump’s position on a woman’s right to choose got those doubts cleared up in his first post-election interview where he let women know to plan on doing some traveling once Roe v. Wade is erased by his new judges.

Asked where that would leave women seeking abortions, Mr. Trump, on the CBS program “60 Minutes,” said, “Well, they’ll perhaps have to go — they’ll have to go to another state.”

On immigration, he said the wall that he has been promising to build on the nation’s southern border might end up being a fence in places. But he said his priority was to deport two million to three million immigrants he characterized as dangerous or as having criminal records, a change from his original position that he would deport all of the estimated 11 million undocumented immigrants in the country. President Obama has deported more than two million undocumented immigrants during his time in office.

Don’t worry, other 8 million or so immigrants. Trump will be coming for you next. And 300 million citizens? You’re third.

Meanwhile, protests against Trump show no signs of dying down. In fact, they are growing larger and spreading to more locations.

Protesters are upset about Trump’s policies on health care, the environment, LGBT rights and other issues. Some are questioning the legitimacy of Trump’s victory over Hillary Clinton by noting that although he took the Electoral College, Clinton won the popular vote.

Protests are planned this week in more locations, including St. Louis. See you there.