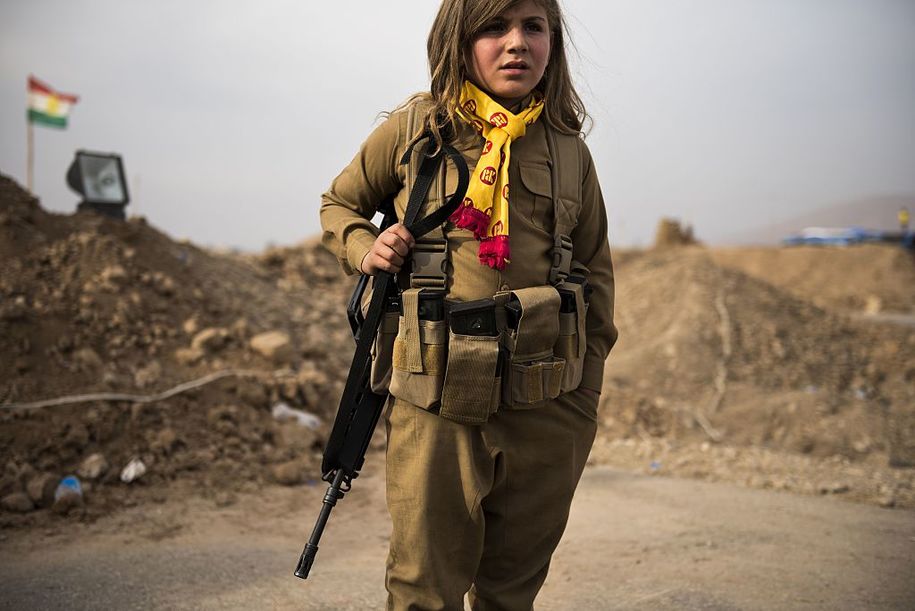 A Kurdish girl at the Iraqi Kurdish Shaqouli checkpoint

Not every ISIS leader made it out of Mosul. On Friday, both Iraqi forces and ISIS confirmed the death of a high-ranking leader.

Mahmoud Shukri al Nuaimi, a senior figure in the militant setup who also is known as “Sheikh Faris,” was killed in a coalition airstrike in western Mosul on Tuesday, the sources said.

al Nuaimi was one of around 1,200 ISIS fighters killed so far in the push to take one of the two cities remaining under ISIS control. Other ISIS leaders are attempting to flee.

The Mosul residents CNN spoke with say they fear the teenage fighters as much, if not more, than other ISIS fighters because they have been brainwashed, have no fear and have a great amount of zealotry after being indoctrinated and trained for two years.

Though forces are continuing to move in and free residents from ISIS control, progress isn’t coming fast enough for some.

With the city encircled by forces from the Iraqi army in the south, Kurdish forces in the north, and a coalition of militia blocking roads to the west, it’s unclear that ISIS leaders can do more than hide. However, they can still cause terror and death.

As ISIS loses ground in Mosul, they have been executing men they accuse of spying for the Iraqi military.

Some witnesses say dozens of bodies are being left at junctions across the city — stark warnings to residents not to collaborate with the incoming Iraqi forces. They are not being removed as residents fear reprisals from ISIS militants.

Meanwhile, even in areas that have been liberated from ISIS, Mosul residents worry that the city’s once tolerant nature may have been lost forever.

But now that his town, an early target of the Iraqi security forces as they advance on Mosul itself, has been cleared of the Islamic State forces, it is not jubilation [Christian farmer Mosa Zachariah] feels, but fear of what awaits him if he tries to return. He wistfully talked about his city’s diversity as something completely unattainable now. “In that time, the Muslims and Christians were like brothers,” he said.

Shiites also used to call Mosul home, but many now fear to return after first the US invasion, then ISIS and now the battle to recapture the city, have torn friendships and created an environment where diversity isn’t seen as a virtue.

Before the Islamic State’s occupation began more than two years ago, Mosul was Iraq’s most diverse city. Its rich culture, stretching back to the ancient Assyrians, and reputation for tolerance made it a vital symbol of an Iraq that could at least aspire to being a unified and whole nation.

Now, as Mosul’s exiled civilians watch the battle for their city unfold, the only thing they seem to have in common is the belief that they once shared a special history that can never be reclaimed.

If Mosul is to really be “liberated,” officials are going to need to work at least as hard after the battle as during in order to return the city’s character.

Mosul is a truly ancient city. It adjoins the ruins of Nineveh and indigenous Assyrians who live there today still refer to the city by that name. It’s a fretwork of cultures and ideas built up over 5,000 years that has survived the rise and fall of empires—and it’s the place Jonah was supposed to go and cry “doom” before he resisted and ended up swallowed by a fish. There’s no doubt the city can be retaken from ISIS, it’s less clear that the city’s character will survive.