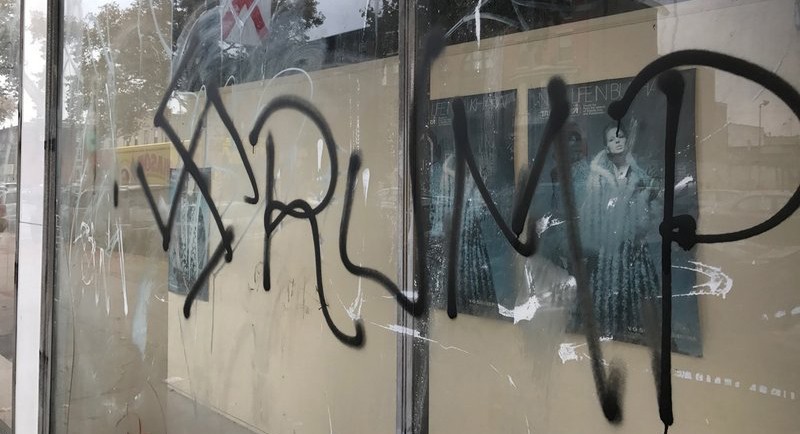 So the above happened on the 78th anniversary of Kristallnacht.

In one image, a swastika replaced the T in Trump’s name, another featured the German phrase “Sieg Heil” (“Hail victory”)—a phrase popularized in Nazi Germany. Philadelphia police Public Affairs Officer Christine O’Brien said detectives respond to the location in South Philadelphia after receiving a call about the graffiti.

It has begun. Trump has won the election and now the elements of white supremacy he gave the wink and nod to have begun to crawl out from under their rocks and openly mock, taunt, vandalize, assault and terrorize the people they deem as their enemies: All the rest of us.

A U.S. Muslim civil rights group said on Thursday it was monitoring reports of several incidents targeting Muslims in the United States since Republican Donald Trump’s victory on Tuesday and called on the president-elect to denounce the attacks.

The reports included at least two assaults on women in Islamic head scarves, as well as racist graffiti and bullying of immigrant children, according to the Council on American-Islamic Relations, or CAIR, and other civil rights groups.

“It’s the inevitable result of the mainstreaming of Islamophobia we’ve seen in recent months with the presidential campaign,” CAIR spokesman Ibrahim Hooper said in a phone interview. “Unfortunately, it really is up to Donald Trump to repudiate this kind of bigotry.”

Yeah, II’ll bet they couldn’t be reached. And there’s more.

Mark Potok, a senior fellow at the Southern Poverty Law Center who monitors hate in extremism, said that he’s seen a spike in hate crimes including attacks on women wearing hijabs and racist graffiti – and that suicide prevention hotlines were receiving high numbers of calls.

“I think this is absolutely clearly a result of Trump’s election,” Potok told the Guardian. “Donald Trump has ripped the lid off Pandora’s box.”

Muslim women tweeted that they or people they know are considering not wearing a hijab so they could not be visibly identified and targeted.

Trans Lifeline, a national hotline for transgender people in crisis, told the Guardian it saw its normal call volume triple on Tuesday night into Wednesday morning. According to the Tennessean, a transgender woman reported on Friday that her truck was set on fire in her driveway, and the word “Trump” had been spray-painted on its scorched back.

Wellesley student Sydney Robinson posted a message on Facebook detailing the incident, along with photos and videos showing the Trump supporters in action.

“Edward Tomasso and Parker Rander-Riccardi, two students at Babson College, decided to drive around our beautiful campus with a Trump flag in a pick up truck,” she writes. “They laughed, screamed and sped around campus. Then, they parked in front of the house for students of African decent, and jeered at them, screaming Trump and Make America Great Again. When one student asked them to leave, they spit in her direction.”

The two men were confronted by local police officers, who told them that they were banned from the campus, and would be arrested if they showed up there again.

One Wellesley student laid this out perfectly:

This is not my America, this is Trump’s America filled with hatred and bigotry. This is what he has provoked. Please help us get these faces out there, they cannot get away with this.

The Daily Stormer, a Neo-Nazi website, published a list of dozens of Twitter users who expressed sadness over the election outcome on Wednesday, urging its readers to target and harass them to the point of suicide.

The frontpage of the white supremacist website shows a large photo of President-elect Trump and his wife, Melania Trump, meeting with Speaker of the House Paul Ryan and Vice President-elect Mike Pence. “You should probably go ahead and be afraid now,” writes Andrew Anglin, the website’s publisher. The post suggests it’s readers “can troll these people and definitely get some of them to kill themselves.”

Several of the tweets embedded in the Daily Stormer post show fear over the fate of women, people of color and LGBT individuals in the U.S. under a Trump presidency. One person says they’re worried about possible nuclear war. A disclaimer on the page reads: “We here at the Daily Stormer are opposed to violence.”

And what’s sad is that some Trump supporters who are horrified by all this, still actually think he might give a damn.

From a Trump-supporting hometown friend I've known for 25 years. Inexcusable it didn't happen months ago, but hope this gets pressed on him. pic.twitter.com/RvcvjXaA4H

Yeah, well, that is so not going to happen while Trump is calling the many thousands of protesters who are marching the streets in opposition to the hate crimes and terrorism he’s inspired “paid” and “unfair.”

President-elect Donald Trump broke the relative calm that had fallen over his often controversial Twitter account Thursday night to blame the demonstrations against his election victory on “professional protesters” who he says have been “incited by the media.”

Yeah, because he’s the victim here. Sure. That’s exactly what his supporters think. Trump gave these people the green light. He gave them the go ahead to threaten and terrify people of color.

And what’s even worse is that even if Trump comes out and actually does say something against this terrorism are they going to listen? Are they going to take him seriously, or are they simply going to figure he’s only saying what he has to say?  He didn’t create these people, this hatred may have been stoked and enflamed by the election Barack Obama, but either way he’s clearly shown he’s more than willing to use it to his own ends. I doubt he could put all these monsters back into pandora’s box even he tried. I think they’ll just keep on going because in their hearts they know: Trump is one of them. He’s had plenty of chances to show the opposite and he failed. Totally. It’s too late now.

Meanwhile, the people they truly should hate—ISIS—are celebrating precisely because of the open anti-muslim hatred that flows in a wake of Trump.

Extremists celebrated President–elect Donald Trump’s stunning victory at the polls Wednesday, hoping his triumph will “lead to civil war,“ according to a jihadist monitoring group.

“Rejoice with support from Allah, and find glad tidings in the imminent demise of America at the hands of Trump,” said the al-Minbar Jihadi Media network, which is affiliated with the Islamic State, according to the U.S.-based SITE Intelligence Group.

“Trump’s win of the American presidency will bring hostility of Muslims against America as a result of his reckless actions, which show the overt and hidden hatred against them,” the al- Minbar Jihadi Media network continued.

Unfortunately, this is exactly plausible.

America has made history, it’s elected the favored presidential candidate of both domestic (KKK) and foreign (ISIS) terrorists.

I see comments where people are arguing that the graffiti might be meant ironically by anti-Trump people — I tend to think the point of being ironic is also being somewhat obvious about it or else the irony is lost — but this isn’t about any single incident.  I wrote this because in the last few days this trend has begun to literally explode.  A couple days ago Raw Story had documented 58 similar incident of vandalism, harassment and assault. Now they’re up to 138 incidents.

In a single day, Raw Story has reported on three cases of pro-Trump related bullying of students. The first occurred when students in Minnesota were greeted with “F*ck n*ggers” written on their door. A Michigan middle school had a small group of children chanting “build that wall,” while their fellow students, who are Latino, were crying. Another school, this one in Pennsylvania, had students marching with Donald Trump signs while chanting “white power.” We also covered a story of Trump supporters, who filmed themselves driving through Wellesley College, Hillary Clinton’s alma mater and harassing black students. George Zimmerman was also kicked out of a bar for calling someone a “n*gger lover,” though he wasn’t embolden by Trump. That’s just who he is

Thursday, we covered a south Philly neighborhood subjected to Nazi graffiti. A Utah man told a neighbor boy, “get out of here n*gger” — then attacked the boy’s dad with stun cane.

Friday, a report came in of an Afghanistan war veteran, who was rammed with a truck by Trump supporters. He was holding a sign reading “Veterans Against Trump.” The supporters tried to engage with him but when they were told police were on their way they fled the scene. Friday, we also learned that a Florida High School now has “white” and “colored” water fountain after students put up signs.

Saturday, Raw Story wrote about a teacher caught taunting a Latina student and her parents in Los Angels. In Gwinnett County, Georgia, a Muslim high school teacher received a note from her student telling her to hang herself with her own “headscarf.” The famous aren’t safe either. Trump supporters threatened and harassed some of the stars of HBO’s “Silicon Valley” at a Los Angeles bar.

This is just the beginning and from what I can see, it’s only likely to get worse, not better.

Yes, there are incidents of Anti-Trump violence too, but those people are not doing all of this, ironically or otherwise.

While there have not been many of these, there are incidents of anti-Trump violence. In the case of a Los Angeles school, Trump supporters were attacked and one principal is on leave after anti-Trump attacks. Another with anti-Trump protesters in College Park. Another man was also robbed and assaulted.

Also this post is not about Hillary or her campaign, but it should be pointed out that when she said “half” she was probably low-balling it.

The survey posed 21 questions on attitudes towards race to 16,000 Americans, including supporters of Donald Trump, Hillary Clinton, and Bernie Sanders. Ted Cruz and John Kasich supporters were also surveyed, before their candidates dropped out of the presidential race.

About 31 percent of Trump supporters said they “strongly agree” that “social policies, such as affirmative action, discriminate unfairly against white people,” compared with 16 percent of Clinton supporters.

I did write that the undeplorables, the people who weren’t supporting Trump because of his racism and bigotry but instead because of economic concerns were a bigger problem, because those people were. not. listening. to. Hillary — even though her economic plan would have been far better for them. And lastly chances are very high that these same types of incidents would have occurred even if she had won, only they would have been fueled by rage, rather than haughty arrogance.