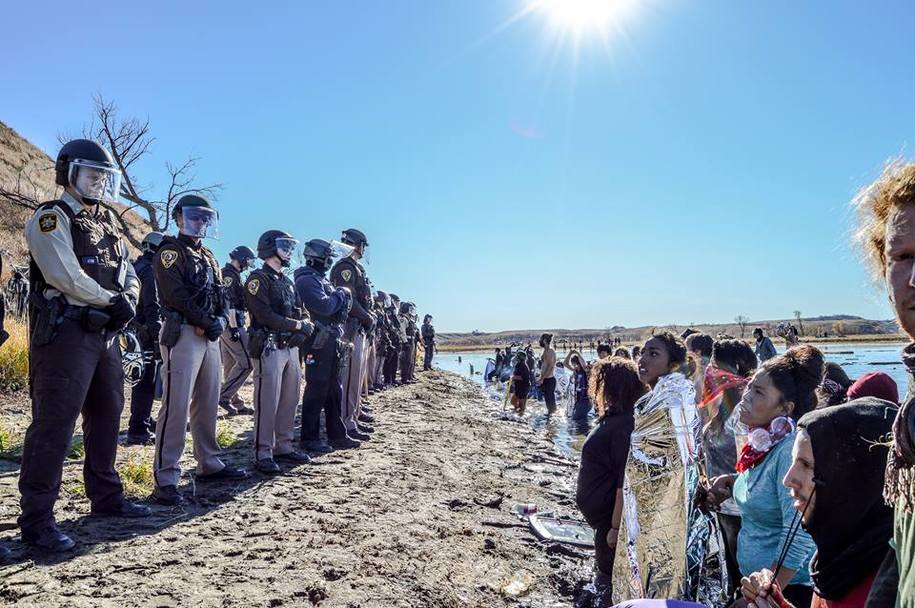 Militarized police facing peaceful Water Protectors praying about the desecration of a burial site on the hilltop.

I’ve been offline since Tuesday, Nov. 2, to help bury my 86-year-old auntie on the Navajo reservation. In the air, driving for hours and sporadic reservation connectivity removed me from my Standing Rock news watch. Trying to catch up was difficult as so much happened. Below is the result of my reading. I would like to caution you on what you read on Facebook. Some of it is not verifiable and likely didn’t happen, like the officers turning in their badges report.

The most disconcerting Standing Rock event was an prayer ceremony held on Tuesday, Nov. 2, at Cantapeta Creek, north of the Standing Rock Sioux Reservation. “A confrontation erupted after law enforcement dismantled a wooden bridge that demonstrators constructed to access a sacred site.” They were met by militarized police, high-pressured OC spray and rubber bullets fired at close range on the completely peaceful demonstration. The Morton County Sheriff claims the Army Corps of Engineers ordered them to remove the bridge and arrest any individuals who crossed the river for criminal trespass. Morton County doesn’t have jurisdiction on federal land. It is unclear exactly who is leading the military operation here. What is clear and has been documented is that the Morton County police felt it was okay to massively pepper spray the crowd and randomly shoot rubber bullets into the crowd. 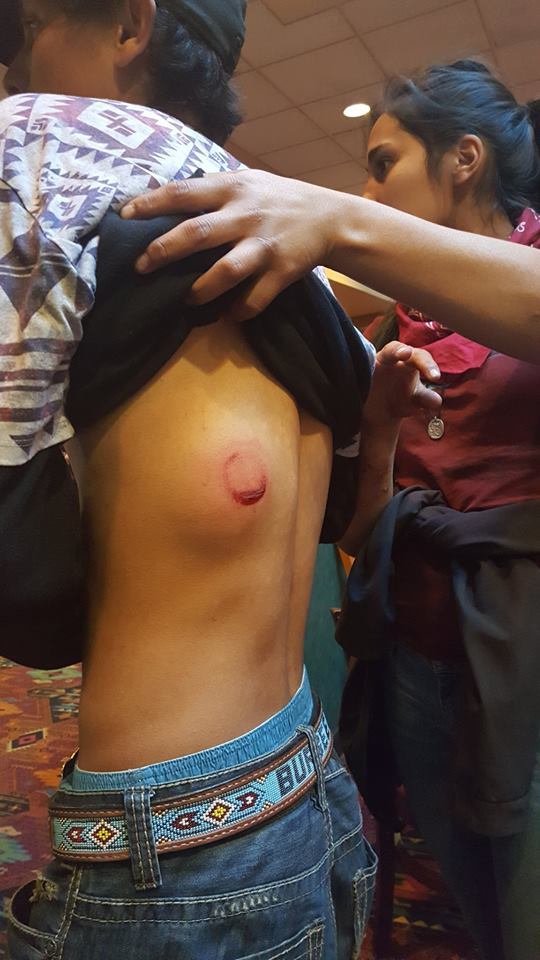 A young Water Protector shot in the back by Morton County police by a rubber bullet.

Congressional candidate Erin Schrode who is a regular commentator with ABC News and specializes in Eco Impact reporting, was interviewing a peaceful demonstrator on the banks of the river when she was shot with a rubber bullet in the back, which she speculates was for reporting on Standing Rock news.

Speechless. I was shot by militarized police WHILE interviewing a peaceful man at Standing Rock live on camera. I woke up this morning with the thought that I may have that very footage – and broke down in reliving the 40-second horror before my own eyes. Warning: it’s very very difficult to watch and sent me into quivers and tears, even without the compounding historic trauma that Native Americans face.

I couldn’t fathom that I’d just been hit. Why would they target me? Why would they shoot anyone?” Schrode said. “There was absolutely nothing violent, aggressive or provocative going on at the protests yesterday.

… construction near the Missouri River has been halted due to claims that the company is on Federal land. The Dakota Access Pipeline has continued construction under the fallacy that they were operating on land previously purchased by the company. Through investigative journalism and drone video footage, documentation of pipeline misconduct has been shared and witnessed by people from all over the world and has influenced the Army Corps of Engineers to conduct an official review of pipeline construction.

Native News Online also reported that Army Corps of Engineers Colonel Henderson apologized for allowing the Morton County Sheriff’s Department for not allowing water protectors to go onto sacred land to pray for the disturbance caused by the pipeline. More Keystone XL Kops incompetent behavior, only much more dangerous.

An amazing event took place on Thursday, November 3. Over 500 clergy from 15 different faith traditions traveled to Standing Rock to witness and show their unity for inclusive justice. They prayed on a bridge near the main Oceti Sakowin Camp and then sang a hymn in the Dakota language that the Dakota 38 sang in the gallows at Mankato before being hanged.

…the largest mass execution in U.S. history. On Dec. 26, 1862, on the direct orders of President Abraham Lincoln, 38 eastern Dakota (Sioux) men were sent to the gallows in Mankato, Minn., the penultimate act in the six-week-long Dakota War of 1862, also known as the Sioux Uprising. The final act was the expulsion of the Dakota from Minnesota and the termination of their reservations in the state.

More can be read about this mass hanging as written by Meteor Blades: “Dakota Descendants Seek Memorial for Largest U.S. Mass Execution.” Descendants of the hanged were present last week during this Standing Rock event.

This is video of the clergy denouncing and then burning a copy of the Discovery Doctrine. This Vatican papal bull is cited by first SCOTUS Chief Justice Marshall as the source of USA’s right as a “discovering Christian nation” to nullify land rights of Indigenous nations and peoples in this hemisphere. Every denomination present who has repudiated the document chose a representative to read aloud at this event. The clergy told law enforcement “You’re standing on Dakota land.”

We insist the state of North Dakota, the Morton County Sheriff’s Dept. and various governments in the world dismantle the legal structures & policies based on the Doctrine of Discovery and dominance. So as to better empower and enable Indigenous people to identify their own aspirations and issues of concern.

Our own TrueBlueMajority was present.

Father Floberg of St. James’s Episcopal Church in Cannon Ball, ND (explaining the doctrine of discovery) was the one who organized this. He sent out the call and would have been happy if 100 clergy had showed up. Many more than 500 clergy were registered before it was all over, plus a bunch of people who just showed up who did not sign in on his website, plus an uncounted number of lay ministers who did not realize they were allowed to sign in on the clergy site. It was overwhelming.

Link to short video providing an beautiful overview of this clergy visit is here.

Later that day about 100 people including some of this clergy gathered to pray at the capitol in Bismarck. The group entered the building and wanted to speak with Governor Dalrymple to state their opposition to the pipeline and ask why the National Guard was activated. Police locked down the area and arrested 14 people. Some of the group then made their way to the governor’s mansion where they were met by riot police, and more arrests were made.

We’ve gone from almost no media coverage in August to daily coverage from numerous sites today. Here’s one recent headline:

Native American women are leading the movement against the Dakota Access pipeline, but say they face cruel and inhumane treatment from police.

Like many other movements for American Indian tribes over the last few centuries, women have governed the decision whether or not to go to war. We have matriarchal tribal structures and that is definitely the standard for leadership at Standing Rock. 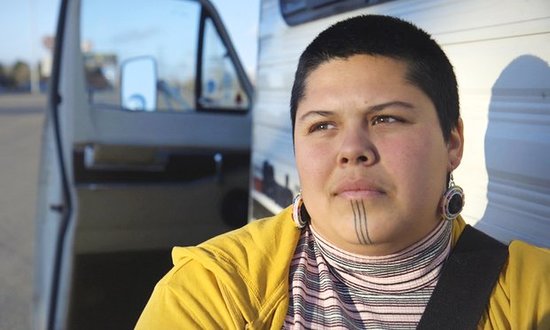 Caro Gonzales, a member of the Chemehuevi tribe: “Women are the backbone of every tribe.”

“Women are the backbone of every tribe and every indigenous community,” said Caro Gonzales, a 26-year-old member of the Chemehuevi tribe.

“Whether feeding people or being on the frontlines … it’s all indigenous women and two spirits.”

The most disturbing account to me in The Guardian’s piece on women at Standing Rock is that these Water Protectors were thrown into cells that were packed with Native women who appeared to have been arrested for low-level offenses. These women are not part of the pipeline actions. Native women are disproportionately incarcerated in North Dakota, home of the oil field “man camps” that has huge needs for sex trafficking of Native women, a state that can’t get rid of its Indian problem, home of a place where Native women are expendable.

As Meteor Blades recently reported, American Indians are killed by cops at the highest rate in the nation. Like our black brothers and sisters in their communities, we are targeted for police abuse in our communities.

It’s a good link-rich article, The Guardian has provided a lot of coverage for Standing Rock. I thank them.

And finally, an under-reported story:

On October 27, when hundreds of militarized police raided the front-line camp, used sound canons, rubber bullets, mass pepper sprayed the people holding the camp, and arrested over 140, a small victory occurred at the same time. Desiree Kane, (Miwok) who has been at the Oceti Sakowin camp for months, reported that about 40 people kept over 200 police from reaching the main raid. They blockaded a road with hay bales and wood logs. 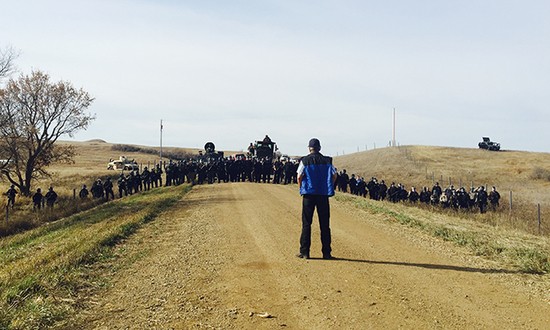 The small group prevented those police from reaching the front-line camp.

There were 250 fewer officers able to show up to brutalize people and pervert prayer ceremonies on October 27. History rarely teaches us about when Natives win against the state. And that’s how injustice flourishes: in the shadows.

So let me be clear. On October 27, when a colonial force armed with military weapons faced off on a bridge against veterans armed with only prayer, the Natives won.

BACKGROUND: My detailed news timeline on Dakota Access Pipeline (DAPL) vs. the water protectors can be read here if you need it.  I’ll be updating it today with whom to follow at Facebook for frequent personal reporting on Standing Rock. I’ll also list some group pages.

We are all stewards of the earth