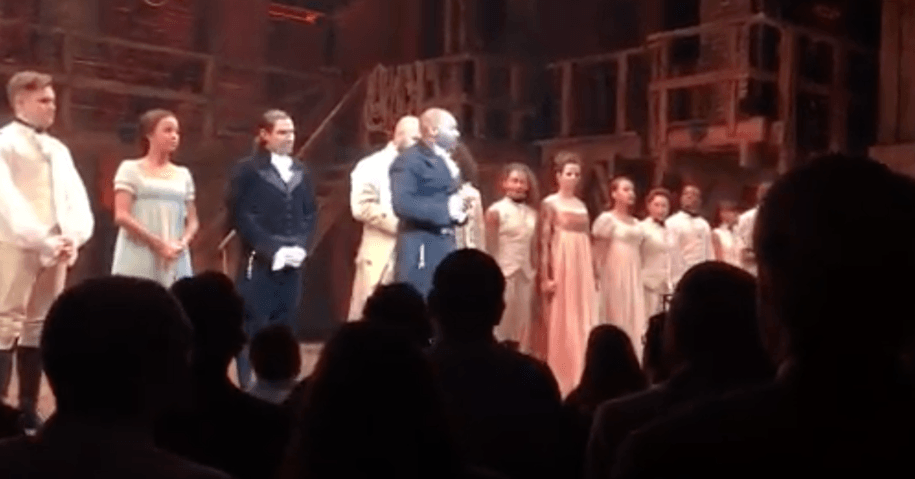 It was an icy reception as the Vice President-Elect Mike Pence entered the the building to see the highly acclaimed and popular Broadway sensation Hamilton on Friday. He received cheers and boos.

Before he left, Pence received a message from the stage about diversity and equality.  But first, Marc Snetilker tweets a personal message to Pence:

Here are the words by Brandon V. Dixon representing the cast and the essence of the play, Hamilton (@HamiltonMusical). Dixon first speaks to the audience and then catching the attention of Pence who was leaving the building:

Do you know who was joining us tonight? You know, we had a guest in the audience this evening. And Vice President-Elect Mike Pence, I see you’re walking out. I hope you will hear us just a few more moments.

We have a real message for you, sir. We hope that you will hear us out. And I encourage everybody to pause your phones and tweet and post, because this message needs to be spread far and wide, okay?

Vice President-Elect Pence, we welcome you and we truly thank you for joining us here at Hamilton American Musical, we really do.

“We, sir — we — are the diverse America who are alarmed and anxious that your new administration will not protect us, our planet, our children, our parents, or defend us and uphold our inalienable rights.” We truly hope this play has inspired you to uphold our American values and to work on behalf of all of us — all of us  (loud applause) … this American story is told by a diverse of men and women of different colors, creeds and orientations.

I usually don’t ask questions at the end of my stories, but I’m curious. Do you think Pence will heed those words or will he simply go back to being the homophobic pro-LGBT conversion therapy Mike Pence, and running mate of the racist … Donald J. Trump?