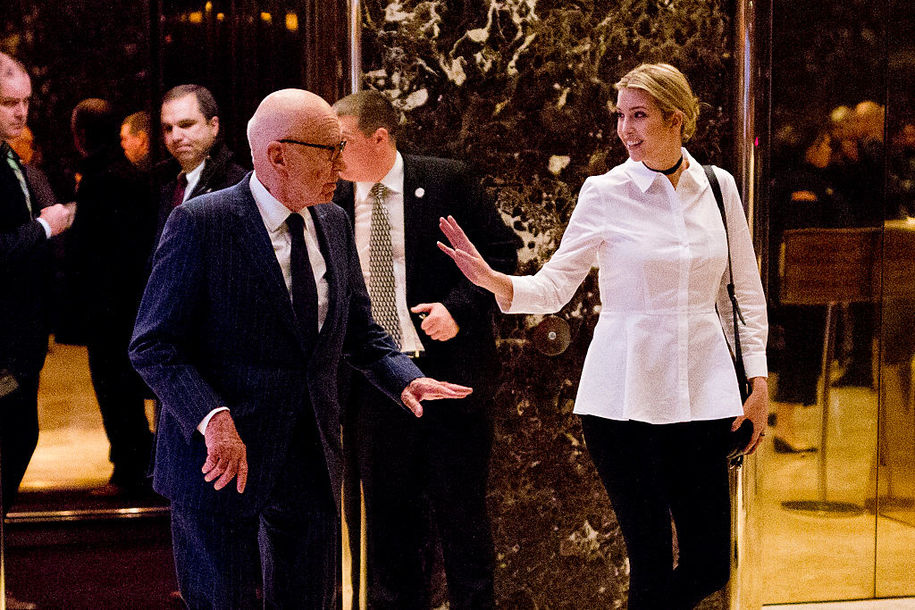 It’s okay, Rupert. We’ll let you know when we have something we want you to front for us.

Donald Trump’s daily outrages now involve nation-states with economies (and armies). According to his advisers, he’s fielded over 50 calls with foreign leaders, and even in the handful that we know about he’s taken the time to pick up a building permit, make an introduction for a business partner, and use a foreign leader as leverage in a licensing deal.

Republicans are betting no one cares.

They may well be right. After all, it appears that Donald Trump was 100 percent correct when he said that no one cared about his taxes. No one did. Or at least, Trump voters didn’t care enough to stay away. By any measure, Hillary Clinton was penalized for being open while Trump took no damage for turning his finances into a black box.

And as a result, we can expect radical lack of transparency to be standard operating procedure in the new administration. In fact, it has already started.

It’s no accident that what we learned about Trump’s call to Argentina came via an Argentinian journalist. What we learned about India came from an Indian news article. Trump intends to tell Americans nothing about his massive and ongoing conflicts of interest.

Except, of course, when a photo op can be turned into profit. Like how his daughter wasn’t just present at a meeting with the prime minister of Japan—she was using him as a prop to finalize a business deal.

When Donald J. Trump hosted a foreign leader for the first time as president-elect, the guest list included a curious entry: Mr. Trump’s daughter Ivanka, who looked on last month while he and Prime Minister Shinzo Abe of Japan chatted on a white couch high above Manhattan.

Some 6,700 miles from Trump Tower, in Tokyo, another exclusive gathering was already underway: a two-day private viewing of Ivanka Trump products, teeming with Trump-branded treasures like a sample of the pale pink dress Ms. Trump wore to introduce her father at the Republican National Convention.

The circumstances highlight the remarkable tangle awaiting the Trump family, its sprawling business empire and those who have interacted with the family at home and abroad — a web of complications that seems certain to persist even if Mr. Trump makes good on his promise to remove himself from his company’s business operations.

In this case, the public association between Ivanka and Prime Minister Abe was a part of making the deal sweeter, but as the incidents in Argentina and Turkey show, Trump can also make gains by keeping the news in the dark.

Trump has absolutely no plans to open up his life and his activities as have previous presidents. The press should get used to their traveling pen and to camping out in the lobby of Trump Tower for those rare moments when Trump thinks he can use them. Any leaks we get about what he’s actually doing up in the office with all the Yea-me! awards will have to come from countries where politicians still feel like they have to be at least marginally concerned about the public’s right to know.

America surrendered that right at the polls. Trump doesn’t have to tell, he doesn’t believe the president can have a conflict of interest, and the Republican Party agrees.

Indeed, the GOP is so easily dismissing Democratic threats of investigations and ethicists’ calls for divestment out of a belief that the political landscape has shifted. Voters rewarded Trump in part on the idea that success in business will equal success in government, and Republicans are therefore unwilling to encourage the president-elect to put distance between the Oval Office and Trump Tower, or between himself and the children who serve him as trusted advisers.

Trump has stated that he will have a “major announcement” on December 15 regarding his business. On the surface, that announcement sounds like it will entail exactly the sort of not-blind trust Trump suggested during the campaign, where the Trump organization is run by his children. So expect lots of photos of a smiling Ivanka meeting with the leader of wherever she’s trying to sell Chinese-made dresses.

It’s possible that Trump’s announcement might signal a slightly hazy trust run by someone like Mitt Romney, who Trump met with on the evening before his pre-announcement announcement. It’s equally likely that, like the birther moment of his campaign, the only thing major about the day will be the major airtime Trump generates for one of his properties.

Not handing over his taxes was a test. Not a test for Trump. A test by Trump. A test that the voting public passed with flying colors.

Now he knows that, just as he claimed, he really can get away with anything.

Take, for example, the budget process. Normally, an incoming administration issues a fiscal plan conveying its priorities soon after taking office. But as the budget expert Stan Collender notes, there are strong indications that the Trump administration will ignore this precedent (and, possibly, the law) and simply refuse to offer any explanation of how its proposals are supposed to add up. All we’ll get, probably, are assurances that it’s going to be great, believe me.

Putting together a budget would get in the way of making profits. Which isn’t going to happen.

President Trump To Law Enforcement Officials: Let Those You Arrest Hit Their Heads?