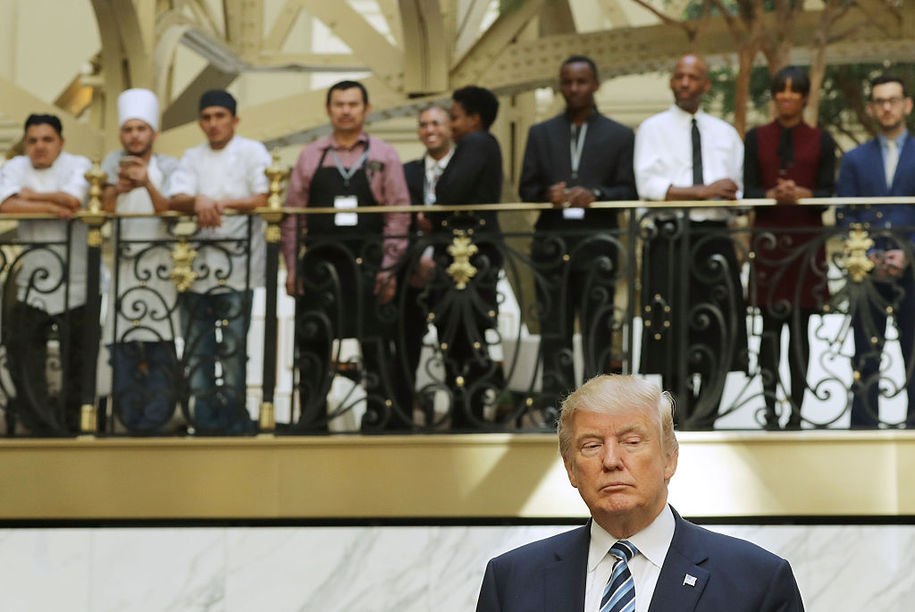 The Trump International Hotel & Tower Toronto is going belly up, only four years after the grand opening. From Politico:

This Trump-branded and Trump-managed jewel is also, as a business venture, a bust.

On Tuesday, a Canadian bankruptcy judge placed the glass-and-granite building into receivership, just four years after Trump and his children cut the ribbon at its grand opening. Once it’s auctioned off, whether or not Trump is the leader of the free world by then, his name may well vanish from its marquee.

The fairly new hotel and residential tower is Canada’s second tallest skyscraper. The development has been mired in controversy and lawsuits, many of which arose from the lower-than-expected occupancy rates. Donald Trump’s Russian friends were the primary investors:

Trump is not the project’s developer or even an investor; one of his partners, a Russian-born billionaire who got rich in Ukraine’s steel industry, controls the firm that’s in default. The Trump Toronto is still a posh hotel, and even though nearly two thirds of the tower’s condo units remain unsold, they’re still upscale residences. Still, the saga of the property’s glittering rise and rapid fall is classic Trump, featuring a tsunami of litigation and bitterness, money with a Russian accent, and a financial wreck that probably won’t hit its namesake particularly hard.

Incredibly, this was Trump’s second attempt at a project in Toronto. You won’t believe how the first one fell apart:

Trump first got involved in the project 15 years ago, when he held a press conference with Toronto’s mayor to announce his plan to build a new Ritz Carlton downtown. That plan fell apart when it came out that his development partner was a fugitive who had been convicted of bankruptcy fraud and embezzlement in the U.S. Trump then forged a licensing and management deal with Shnaider and another Russian-Canadian named Val Levitan, whose name comes up a lot in the documents because he had no development experience. Talon pre-sold 85 percent of the units at near-Manhattan prices before the groundbreaking in 2007, but most of the buyers backed out after the global financial crisis ravaged the real estate market, and Levitan was eventually forced out.

Regardless of what happens with the Trump International Hotel and Tower in regards to eventual new ownership, it seems highly unlikely Trump’s name would remain on the building in the long-term. In December 2015, Toronto City Councillor wrote the develop asking them to remove Trump’s name from the building:

There are some who may suggest that Canadians should just ignore Mr. Trump, or that he doesn’t matter because he is a political figure in another country.

However, recent attacks against Muslims in Toronto, and other Canadian cities, show that we are not immune to hateful actions against peaceful people. As well, the Canadian government’s similar internment of Japanese-Canadians is a part of our past that is still very painful for many.

I assume your original intent was just to associate yourself with a luxury brand, and that in no way am I suggesting that you were aware of Mr. Trump’s views at the time. But there is now no doubt that the name Trump is synonymous with racism and xenophobia.

To have the Trump name displayed so prominently on our skyline signals a tacit acceptance of hateful and divisive views.

Toronto is a diverse and accepting city because those values have been, and continue to be, actively promoted, celebrated, and defended.

History has demonstrated that symbols and words matter.

It is time to remove the Trump sign from your building and our city.

Given the Trump brand’s growing unpopularity, even if the property survives bankruptcy and gets new owners, there is little doubt those T-R-U-M-P letters will eventually be coming down from that hotel in the not-too-distant future.