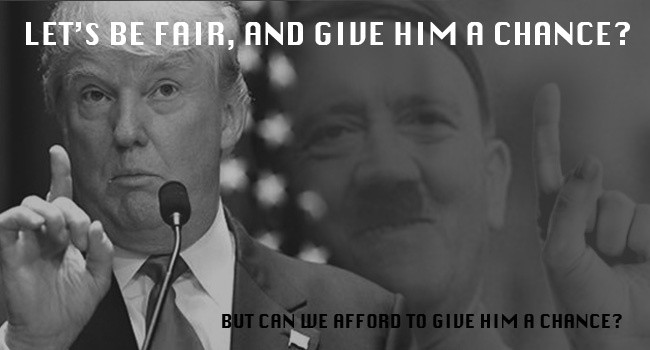 If we ignore the obvious we’re inviting history to repeat itself.

In a New York Times column published Monday, former CIA officer and conservative “Never Trumper” Evan McMullin warned that Donald Trump displayed “authoritarian tendencies.”  McMullin finds it disturbing that certain world leaders elevate themselves above the law and even sometimes above truth itself in order to further their selfish ends.

“Their profound appetite for absolute power drives their intolerance for any restraint — whether by people, organizations, the law, cultural norms, principles or even the expectation of consistency,” McMullin said. “For a despot, all of these checks on power must be ignored, undermined or destroyed so that he is all that matters.”

McMullin was particularly troubled by Trump’s inflation of his popular vote performance by questioning the votes of “millions” as illegal.

“Authoritarians often exaggerate their popular support to increase the perception of their legitimacy,” he said. “But the deeper objective is to weaken the democratic institutions that limit their power. Eroding confidence in voting, elections and representative bodies gives them a freer hand to wield more power.”

Furthermore, McMullin warns that autocrats aim to desensitize the populace in order to position themselves as the ultimate authority, and in so doing undermine the institutions of government.

“As we become desensitized to the notion that Mr. Trump is the ultimate authority, we may attribute less importance to the laws, norms and principles that uphold our system of government, which protects our rights,” McMullin said. “Most dangerously, we devalue our own worth and that of our fellow Americans.”

This presentation of oneself as the ultimate authority and the only one who can make it happen, is not new to Donald Trump. Adolph Hitler stood on the same platform in 1933; indeed, Hitler’s platform and Trump’s platform have more similarities than just authoritarianism. Hitler made a number of promises to the German people. Key among these promises were:

There is also a parallel to how Hitler handled propaganda and how Trump and his Joseph Goebbels equivalent, Steve Bannon, handle it. Goebbels was the Minister For Public Propaganda And Enlightenment. Goebbels opined that Germany’s “only hope” was Hitler. This comports with Breitbart publishing that 66% of American voters believe that a Trump election is necessary to “prevent American decline.”

Hitler said that “propaganda must confine itself to a very few points and repeat itself endlessly”[2] and this practice is seen in Nazi posters from the time. Another important strength of the Nazis was the funding they received from rich, communist-fearing businessmen. This money allowed the Nazis to produce propaganda, control the media and run campaigns among other things.

We must never forget that we are born equal, with basic, natural rights, including those of life, liberty and the pursuit of happiness. Those rights are inherent in us because we are humans, not because they are granted by government. Government, indeed, exists primarily to protect those natural rights; the only legitimate power it has is that which we grant to it.

The civility of political discourse and commentary has washed out to sea since Trump has been in the national consciousness. The fundamental principles upon which our democracy is based are now put to the test; will this fire temper and harden those principles or warp and destroy them? Trump is a dangerous, divisive demagogue, the worst in our nation’s history and the second worst in modern times. May we find the strength to protect America from his corrosive influence.