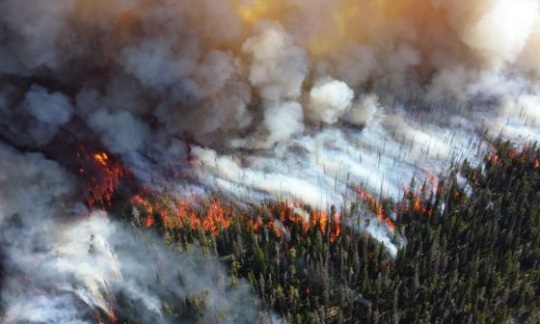 WASHINGTON —(ENEWSPF)–June 10, 2016.   As the 2016 wildfire season begins, federal agencies are again alerting industry and the public that the use of private drones (Unmanned Aircraft Systems or UAS) over or near active wildfire operations puts firefighters at risk and hampers their ability to protect lives, property and natural resources. To underscore the dangers, the U.S. Department of the Interior, U.S. Forest Service and Federal Aviation Administration (FAA) have launched public education campaigns and are collaborating with industry to increase drone operator awareness of wildfire locations and the penalties for illegal UAS use in the area of a wildfire.

“The Interior Department and Forest Service believe these enhanced public education measures offer better public awareness about the use of drones and can reduce the risk of inadvertent drone use in wildfire areas that threaten the safety of our firefighters,” said Mark Bathrick, Director of Interior’s Office of Aviation Services. “The initiative to share initial wildfire location data with commercial mapping providers is especially promising.”

“FAA’s leadership to address the drone incursion issues by implementing the registration process and establishing enforcement protocols helps reduce the risks to our firefighters and the lives and property they strive to protect,” said Art Hinaman, U.S. Forest Service Assistant Director for Aviation.

Last year alone, there were more than 20 drone encroachments over active wildfires. Two required pilots of firefighting aircraft to take evasive action to avoid a collision, 12 adversely affected the management of fire incidents, and one shutdown an entire highway corridor in California.

Working together to increase public awareness about the threats of flying a drone over a wildfire, the Interior Department, U.S. Forest Service and the FAA are continuing the “If You Fly; We Can’t” educational campaign launched last year, warning the public of the dangers UAS pose to low-flying firefighting aircraft, firefighters and the public.

While the FAA establishes Temporary Flight Restrictions (TFRs) over most large wildfires and charts them on aviation planning tools,  98 percent of wildfires are controlled (stopped) within the first 24 hours without a TFR in place. As a result, 98 percent of the time responsible drone users, operating within current regulations, have no awareness that the smoke column they see is a wildfire, and that flying their drone could pose a risk to firefighters and firefighting aircraft that are protecting lives and property.

To help address this problem in 2016, the Interior Department’s offices of Wildland Fire and Aviation Services have collaborated with industry to develop a pilot project to make initial fire location data publicly available to commercial mapping providers. This location information will increase awareness of drone operators; and ultimately, drone manufacturers could use the information to automatically “geo-fence” wildfire areas from entry by the drones they build and sell. This data will be available to the public by July.

Federal agencies recognize increasing public awareness is just one component of what needs done. To be effective, enhanced notification and law enforcement processes are required.

The FAA implemented a registration process for drones in 2015, which makes it possible to identify owners of drones caught interfering with fire operations. Additionally, the FAA developed detailed guidance to law enforcement for dealing with suspected unauthorized drone operations.

Complementing these initiatives, the National Wildfire Coordinating Group, an interagency body of senior fire officials from federal and state wildland fire management organizations, established improved drone incursion notification protocols for wildland firefighters. These protocols ensure fire managers receive critical drone incursion and location information so they can make timely decisions to either reroute firefighting aircraft or not fly until it is safe to launch them. The protocols also ensure consistent notification to the FAA and local law enforcement.

Detailed FAA guidance for members of the public flying drones for hobby or recreation purposes is available on its website. In concert with the new measures, the agencies remind the public to: