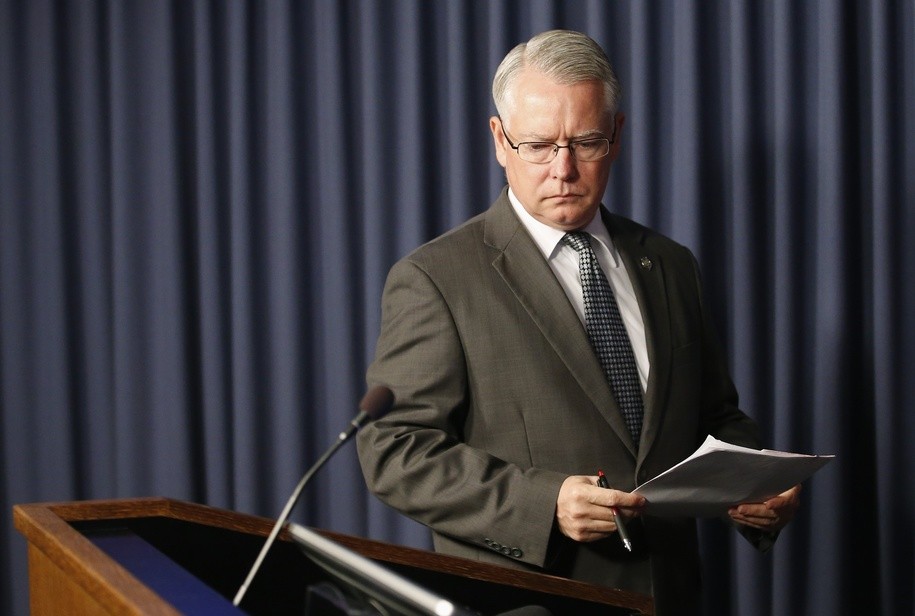 Sheriff Joe Arpaio gets a lot of attention in Phoenix for being corrupt, infantile, fanatical, and power hungry, but he’s not the only bad public servant there. Bill Montgomery, the Maricopa County Attorney, is one of the nation’s worst prosecutors. Montgomery, a Republican, is facing re-election on Nov. 8. His opponent, former prosecutor and Democrat Diego Rodriguez, has been critical of Montgomery’s record. “People just want to know the County Attorney’s Office matches their idea of justice,” he said earlier this week. According to Rodriguez, Montgomery “is a political animal. He’s not what I am comfortable having administer justice in this county.”

Montgomery is bad on a whole host of issues—death penalty, abortion, immigration, marijuana, sex crimes, racial justice, animal protection, transparency, and innocence claims, to name a few. We’ve already covered the fact that Maricopa administers the death penalty more often than 99.5 percent of other counties do, and we will cover all Montgomery’s other red flags over the next few weeks. For now, let’s look at his marijuana policy.

On election day Arizona voters will vote on Prop. 205, a marijuana legalization referendum. From the Glendale Star:

If passed, Prop. 205 would place a 15 percent tax on the sale of marijuana and revenue would be deposited in a marijuana fund and distributed to the departments of Marijuana Licenses and Control and the Department of Revenue. Any localities where marijuana establishments would exist, school districts and charter schools, and the Arizona Department of Health Services would also receive funds from the tax.

Not to mention the criminal justice savings. The Phoenix New Times reported that Prop 205 “could save taxpayers at least $1.3 million in jail booking costs alone, plus more than two man-years of police officers’ time.” Sounds like a pretty good deal, right?

Not to Bill Montgomery. He’s fought every way he can to defeat the proposition.

This is especially concerning because Maricopa is an outlier in marijuana prosecution, even now. While counties like Mesa and Glendale give the police officer the discretion to either cite or arrest someone for possession, that’s not the case in Maricopa. All adult offenders suspected of any possession are simply arrested.

Unsurprisingly, this means a lot of people cycling in and out of jail in Maricopa County. From Phoenix New Times:

Through August 31 of this year, an average of 503 people per month were booked into Maricopa County jail on simple marijuana-possession charges, county statistics show.

That means slightly more than 6,000 people will have been booked on those charges by year’s end. (The actual figure between January 1 and August 31 is 4,682 people booked.) It also means that on any given day, at least 16 people — on average — are booked into the jail on a marijuana-possession charge.

Also unsurprisingly, those arrested for marijuana tend to be disproportionately minority. A 2013 ACLU study found that “[b]lack people in Arizona are 2.4 times more likely to get arrested for marijuana possession than White people.” (The true ratio is actually likely larger, given that the data set counts many Hispanic people as white.)

But despite all of the money spent, the unnecessary arrests, the possible revenue generation, and the racial inequity, Montgomery continues to aggressively fight marijuana legalization. Earlier this week, AZ Central reported that Montgomery “is one of the most active speakers on the campaign circuit against the measure.” He even made “No on Prop 205” his Twitter icon, and he often argues about the issue on Twitter.

He’s also taken the issue to court. In response to Prop 205, Montgomery filed a lawsuit with 12 other people and groups, claiming that the 100-word summary of the proposition failed to adequately summarize the measure’s impact on other laws. But, in August, Superior Court Judge Jo Lynn Gentry dismissed the lawsuit, basically saying that the county attorney and his co-plaintiffs couldn’t even fashion a basic argument. From Judge Gentry’s decision:

“Plaintiffs demonstrated no ability to prepare a summary that would comply with the 100-word limit and with their objections. Plaintiffs, nonetheless, persist in asserting that omitting these provisions from the summary along with what they consider misstatements about the provisions that were included makes the summary fraudulent. Plaintiffs’ position is in essence that the summary should have more fully described what the initiative will do but do not explain how they could do it better. Instead, Plaintiffs simply argue that such a summary creates a risk of confusion and unfairness and threatens the integrity of the initiative process.”

(Side note: Even putting the legalization issue aside, it is baseline concerning that the county’s head attorney couldn’t get the lawsuit past the dismissal phase.)

Anyway, this is nothing new. Montgomery has a history of fighting anything that would reduce the severity of punishment for marijuana possession. He fought the medical marijuana proposition in 2010, and again filed lawsuits to prohibit the law’s eventual passing. And despite medical marijuana being legal now, Montgomery has even prosecuted medical marijuana users under an archaic legal technicality regarding THC resin. In 2013, the Phoenix New Times reported that he was pursuing “a felony prosecution of a medical-marijuana patient for possession of a single piece of infused candy.” From the article:

The patient […] provided New Times with a letter from the County Attorney’s Office saying it intended to prosecute him and a copy of his valid medical-marijuana card. Court records show he is scheduled to appear in court in mid-November to face one felony “narcotic violation” charge.

As the man explained to New Times, he uses marijuana for back pain but can’t smoke because of previous lung surgery. He’s had two cases of spontaneous pneumothorax (collapsed lungs) in the past few years.  […] The man says he bought the Tootsie Roll-like candy at a compassion club. Since then, his public defender has told him that a crime lab determined it contained no “usable marijuana,” only the resin of marijuana — what state law defines confusingly as “cannabis.”

Deputy County Attorney Sean Kelly sent the man a letter in July informing him that he had two options: potential conviction of a felony, for which he could receive up to 3.75 years in prison or a drug diversion program that would cost him more than $3,000.

He’s also fought initiatives that would reduce marijuana possession from a felony to a misdemeanor. Most recently, in 2014, Arizona Rep. Mark Cardenas introduced a bill that would “remove felony charges for possession without the intent to sell.”

“I don’t believe they should go away to prison and face hefty fines and possibly have their civil rights taken away,” he said at the time. “We shouldn’t have people that are being sentenced to long prison terms for simple possession of marijuana.”

Montgomery’s response to the bill was honestly nothing short of deceitful.

“The irony is that if you try to reduce those penalties, you are going to wind up with people who are going to have maybe an ostensibly lower level offense, but they’re going to have more of a conviction record than people who could initially be charged with a felony and be offered diversion and have no record,” he said.

It’s hard to convey in words just how ridiculous this argument is. In Maricopa, the diversion program is in Bill Montgomery’s hands. As head prosecutor, he could divert misdemeanor possession cases just as easily as he could felony cases. The idea that a person should be charged with more on the off chance that later they would end up charged with less is kind of inane to begin with, but for Bill Montgomery to say it is especially inane. If he truly believes that these cases should be diverted, he should just … divert them.

At times, Montgomery has gotten extremely nasty toward people who disagree with him. Last year, during a debate over marijuana legalization held by the Tempe Republican Women, Montgomery told a veteran that he was the “enemy” after he said he’d like to talk to him about the ways medical marijuana improved his life. From ABC 15:

[Don] Ream is a Vietnam veteran. He’s been a medical marijuana patient for several years, and [during Q&A] he told Montgomery he’d like to “educate him” on recreational use.

“I have no respect for you, for someone that tried to claim you served this country and took an oath to uphold the constitution and defend against all enemies foreign and domestic because you’re an enemy,” he said.

The crowd booed back to him.

After the debate, Montgomery released this statement:

“Is [Ream] an enemy like ISIS or Al Qaeda? Of course not. But if he or any other vet is going to use their status as a veteran to encourage people to break the law, then that does make them an enemy of our constitution and our laws and that is a sad commentary on where we are at.”

Sad commentary on where we’re at, indeed. Montgomery is willing to do whatever he can to keep harsh, racist, expensive, pointless marijuana laws on the books in Arizona—including subverting the will of voters and insulting veterans. Is this really the guy voters want in charge of criminal justice in Maricopa County?

Montgomery and Rodriguez are on the ballot in Maricopa County on Nov. 8.