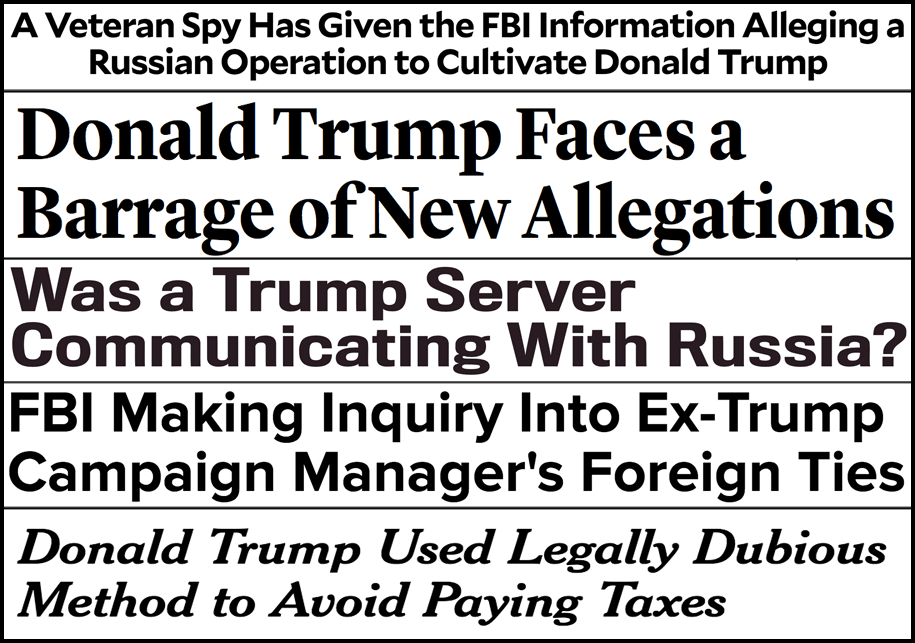 One more week to go…Brace yourselves, it’s going to be quite a week (as if 2016 could get any crazier!). We begin today’s roundup with David Corn’s explosive report at Mother Jones:

In June, the former Western intelligence officer—who spent almost two decades on Russian intelligence matters and who now works with a US firm that gathers information on Russia for corporate clients—was assigned the task of researching Trump’s dealings in Russia and elsewhere, according to the former spy and his associates in this American firm. […]

Mother Jones has reviewed that report and other memos this former spy wrote. The first memo, based on the former intelligence officer’s conversations with Russian sources, noted, “Russian regime has been cultivating, supporting and assisting TRUMP for at least 5 years. Aim, endorsed by PUTIN, has been to encourage splits and divisions in western alliance.” It maintained that Trump “and his inner circle have accepted a regular flow of intelligence from the Kremlin, including on his Democratic and other political rivals.” It claimed that Russian intelligence had “compromised” Trump during his visits to Moscow and could “blackmail him.” It also reported that Russian intelligence had compiled a dossier on Hillary Clinton based on “bugged conversations she had on various visits to Russia and intercepted phone calls.”

And Franklin Foer’s Slate report on a mysterious server at Trump Tower dives into what security and IT experts see as very suspicious activity between that server and Alfa Bank in Russia:

Earlier this month, the group of computer scientists passed the logs to Paul Vixie. In the world of DNS experts, there’s no higher authority. Vixie wrote central strands of the DNS code that makes the internet work. After studying the logs, he concluded, “The parties were communicating in a secretive fashion. The operative word is secretive. This is more akin to what criminal syndicates do if they are putting together a project.” Put differently, the logs suggested that Trump and Alfa had configured something like a digital hotline connecting the two entities, shutting out the rest of the world, and designed to obscure its own existence. Over the summer, the scientists observed the communications trail from a distance.

But wait…there’s more! The FBI is looking into ex-campaign manager Paul Manafort’s ties to Russia, NBC News reports, and The New York Times reports that Trump used a “legally dubious” strategy to write off his creditor’s losses (that’s how he apparently got out of paying taxes for decades). Speaking of The New York Times, a report there claims the FBI thinks there no “clear” link to Russia and that the server “could be an innocuous explanation, like a marketing email or spam, for the computer contacts,” a point disputed by the computer security and IT experts cited in the Slate story.

Here’s Matt Yglesias on all these late-breaking Trump developments:

Breathless speculation about possible Trump-Russia leaks is a lot more fun than boring policy analysis. But Trump’s policy views on matters related to Russia are a lot clearer than any of these cloak-and-dagger allegations.

He’s called for greater US-Russian cooperation in Syria, signaled sympathy for Russia’s seizure of Crimea, and most of all he’s called for dismantling the NATO alliance.

These are policy ideas that can be assessed on the merits (they’re terrible, in my opinion) completely separately from the question of exactly what motivated Trump to adopt them.

In an incredibly important piece, Norman Eisen and Richard Painter at Politico dive into what Trump’s tax returns could tell us about his ties to Russia:

Trump says his tax returns reveal nothing that is not already disclosed on his official candidate financial disclosure, called Form 278e. As ethics counsels to the past two presidents, we dealt with both their tax filings and their Form 278’s and so we know that Trump is wrong. His tax filings have an enormous amount of additional information which, in this case, could be critically important to determining whether his business overseas might affect his decision-making as president. That is because Trump’s 12,000-page tax return may tell us a great deal about his Russian and other foreign business ties that is not on his 104-page campaign financial disclosure. It’s now more vital than ever that we get that information in light of Trump’s embrace of Russian hacking, leaking and interference in our election. […]

If the public saw Trump’s taxes, we could check his Russia connections for ourselves. That should start with the troubling discrepancies in how he and his closest associates talk about his Russia ties. Trump has claimed, for example, that “the reason they blame Russia [for hacking into Democratic emails] is they are trying to tarnish me with Russia. I know about Russia, but not about the inner workings. I have no business there and no loans from Russia. I have a great balance sheet.” But that’s very different from the claims that the Trump Organization was making before he decided to run for president. Trump’s son said in 2008 that “Russians make up a pretty disproportionate cross section of a lot of our assets” and “we see a lot of money pouring in from Russia.”

I take it as a given that most things you hear in the final days of a brutal election are either not true, unsubstantiated or wildly overblown. Speaking for myself, the claims are too serious and the evidence so murky, that I really can’t make any judgments about them. I need a lot more evidence to believe what’s being alleged here.

If such murky and shadowy claims were being made about my candidate on the eve of an election, would I be pleased? I would have to say no.

However, it now appears fairly clear that some arm of the Russian government conducted an aggressive campaign of cyber-espionage against one US political party and used the material to assist Trump’s presidential campaign. Yes, maybe the US government is just making this up and maybe the non-governmental analysts who’ve come to the same conclusions are wrong. I’ve seen stranger things. But the Russian government is now barely making an effort to deny its involvement. Skepticism is always warranted when governments are involved. But dismissing the accusation of Russian involvement out of hand now seems more like denial than skepticism.

Let’s turn now to the continued barrage of criticism against FBI Director Comey’s letter. From The New York Times:

Amid all the noise, it’s worth remembering that even if emails with classified information are found on Mr. Weiner’s computer, that may not change Mr. Comey’s decision, announced in July, to recommend against filing charges against Mrs. Clinton, since the F.B.I. has already determined that she did not intentionally mishandle classified information.

In an election that has featured the obliteration of one long-accepted political or social norm after another, it is sadly fitting that one of the final and perhaps most consequential acts was to undermine the American people’s trust in the nation’s top law enforcement agencies.

And, as always, wise advice from Eugene Robinson:

Take a deep breath. Exhale. Repeat, until the anxiety attack passes. Then go vote, and soon our long national nightmare will be over.[…] The only way he could possibly win is if Democrats and other “Never Trump” voters stay home on Election Day out of complacency. […]

So stop obsessing. Breathe. And vote.