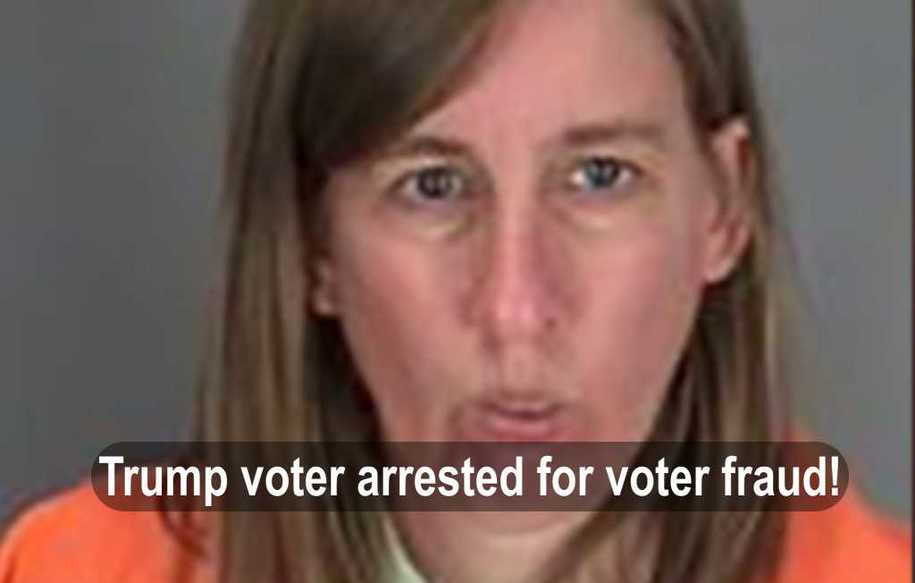 While getting his crowd riled up about election fraud, will Donald Trump inform them that so far it is his voter who got arrested for committing voter fraud? The Des Moine Register reported the following.

A Des Moines woman has been arrested on suspicion of voting twice this month in the general election, police and court records show.

Terri Lynn Rote, 55, was booked into the Polk County Jail about 3:40 p.m. Thursday on a first-degree election misconduct charge, which is a Class D felony.

Rote, a registered Republican, reportedly cast an early voting ballot at the Polk County Election Office, 120 Second Ave., and another ballot at a county satellite voting location in Des Moines, according to a Des Moines police report. …

It’s the first time in 12 years that Polk County Auditor Jamie Fitzgerald can remember ever having to report potential voter fraud, he said Thursday morning.

According to The Brennan Center for Justice, election fraud is virtually non-existent.

The Brennan Center’s ongoing examination of voter fraud claims reveal that voter fraud is very rare, voter impersonation is nearly non-existent, and much of the problems associated with alleged fraud in elections relates to unintentional mistakes by voters or election administrators.

Trump should be careful. By telling his crowd that there is rampant election fraud throughout the country, he could turn some of his voters into criminals as they find a reason to retaliate by themselves affecting election fraud. Of course, the Donald does not care about misleading his flock as it is evident that they are nothing more than a casino machine for him. One hopes his followers wake up sooner than later.