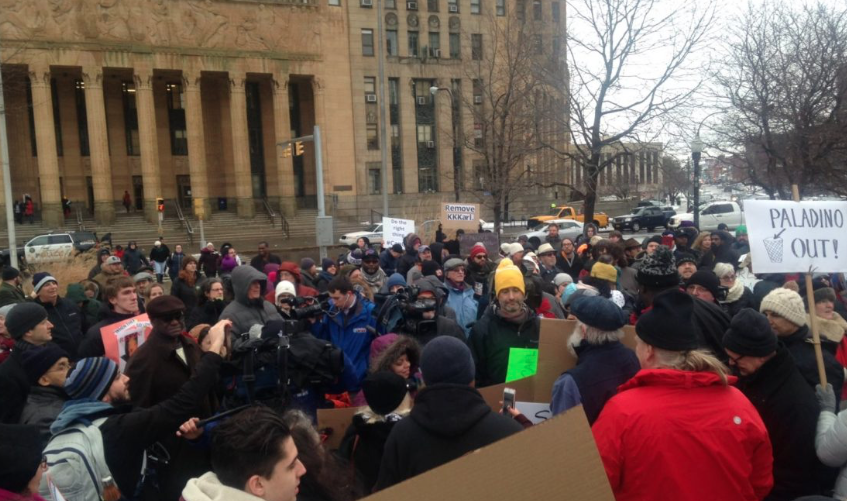 Any student or staff member who had said what Paladino said would have been suspended…but he gets to stay? He says he is, the parents think differently.

Carl Paladino, like many of PEOTUS’s allies, appears to believe he can run his mouth — loosely connected to his brain — with impunity.  The people of Buffalo, New York have other ideas.

After his recent racist comments about President and First Lady Obama there has been an effort to remove Paladino from the Buffalo School Board of which he is a member.  It is expected to get heated today as hundreds of people plan to attend a rally in Niagra Square prior to a board meeting during which these comments will be discussed.

Buffalo School Board member Carl P. Paladino’s latest inflammatory comments to a weekly Buffalo paper saying he wished death by mad cow disease upon President Obama, referred to the first lady as a man and said he’d like her to be “let loose in the outback of Zimbabwe where she lives comfortably in a cave with Maxie, the gorilla” prompted calls for his removal from the board and sparked outrage from Buffalo to the state capital.

Even the transition team for President-elect Donald J. Trump – who Paladino campaigned fervently for – called his remarks “absolutely reprehensible” and having no place in the public discourse.

Paladino said in an interview on WBEN that he would not step down.

The school district in question serves mostly students of color.  Without a doubt any student or staff member would be suspended (or worse) for posting anything close to what Paladino said publicly.

As Rachel Maddow likes to say, “Watch this space…”

About 300 people participated in the rally which was hosted by a coalition of parent and community organizations, including  representation from the local AFL-CIO, as well as state and city teachers’ unions.

The leader of the Buffalo Parent-Teacher Organization, said the group plans to file an official petition with State Education Commissioner MaryEllen Elia asking her to remove Paladino from office.

Today, Dec. 29, the Buffalo School Board is expected to vote on a resolution giving Paladino 24 hours to resign.  If not, it will also call on Commissioner Elia to remove him.

The Buffalo Parent Teacher Organization, Showing up for Racial Justice, VOICE Buffalo and Buffalo Immigrant and Refugee Leadership Team, District Parent Coordinating Council and the Buffalo Teachers Federation all participated in the rally.

– thanks to Tiffany Lankes and The Buffalo News